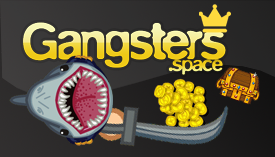 Gangsters.space this is a multiplayer game in which you will land on a huge island, where pirates are already fighting for treasures.
Pirates have always hunted for gold and since you are one of them, you will not be an exception. Ready for a hot battle with the enemies? Then, go! First, you will be available only one skin, but it is only necessary to accumulate more gold and you can buy a new one. But some characters will be available only when you go to the next island.
Enter your nickname and you will be taken to the sandy island, where your rivals are already fighting for the right to own all the treasures of the island. First, try to collect as many gold coins. They will roll after the death of other pirates. The more gold you collect, the larger you will become. Then increase the damage and you can safely attack other players.
The more your opponent, the more gold he will leave after the defeat. But keep , because even the biggest pirate can kill the smallest enemy. When two players ' weapons collide, the punch will be blocked. To strike a powerful blow, you just need to hold down the left mouse button, and then release the aiming cursor on the opponent.
On the island the danger lurks not only in other pirates. The island is in a poisonous zone and gradually the boundaries of the defeat will narrow. On the territory of the red color you will find a quick death. That's why you stay away from her. The winner is the one who will be the last of the survivors.