Royalesurvival.io
53
Vote up!
Vote down! 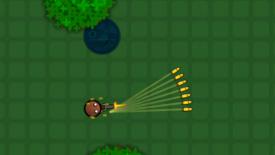 RoyaleSurvival.io is an intense arena-style survival game.  In this minimal clicker game, you will be stranded on a map which shrinks as the game goes on. You will need to seek out items and weapons which you can use to defend yourself, as well as gather various resources in order to craft and create valuable locations and items for gameplay. This game rewards strategic players who are able to plan ahead and manage their resources well in order to create the items and obstacles they will need to be victorious. The game also rewards players who are able to think on their feet and respond to tactical threats as they arrive. Ultimately, this is a survival game so fending off the attacks of other players and making some attacks of your own is inevitable. You will be forced to set barriers and borders and then also to defy them or defend them as warranted. Royalesurvival.io is a tough game but also a fair game which will challenge your preconceptions of what it even means to play games. The minimalistic art is cute at first but as the game goes on you will come to identify those spheres with two eyes and the holographic green grass as nothing more than threats and obstacles to your own victory.

It is an essential piece of RoyaleSurvival.io game.

When you run into a bush, you can conceal your body and escape the sight of ones nearby.
Further, you can launch a surprise assault from that situation. In other words, you are allowed to regain your HP after healing, ambush, and jump out to cause damage to the target when you dwell in a shrub. It is excellent while you have not found guns.

You can deal more damage to the prey by getting close to him before hitting using shotguns. Moreover, you can choose to act in a passive method by hiding somewhere to wait until the objective appears.
If you are successful in slaying someone, you can steal everything he has. It is quicker than breaking boxes. Picking guns or utilizing health packs will slow you down. If you are in a hurry, it's advised not to do that.