allyourbasearebelongtous
56
Vote up!
Vote down! 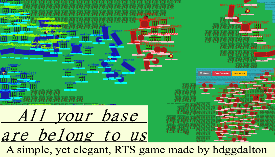 allyourbasearebelongtous is a strategy game loosely based around the Age of Empires games. When you start, you either go into the red team or blue team. The only major difference is the color, but the team assignment script favors the blue team and always assigns new players to it first if both teams have the same amount of players. Otherwise, the team with fewer players gets the new player on their side. There are two main ways to win. First, if there's no one on the other team and at least 2 players on the winning team, the team with the players automatically wins (like a TKO). Second, there is a win countdown that starts when a player reaches a certain amount of points. When the win countdown is at 0, the player with the highest score wins the game for their team. If you need to dethrone the highest player to avoid defeat, all you have to do is either eliminate their base or have someone else get more points than them. When the status of highest scoring player changes hands, the countdown increases by 60 seconds to give the other team a chance to dethrone them back.

If you have lag issues, then access the game through modd.io, usually that's less laggy.

Bump into enemies to attack

B to open shop (must be near base)

Palisade Gate - costs 35 money, has 30 hp, thinner and can be opened with O

Regular Gate - costs 55 money, has 60 hp, thinner and can be opened with O, requires lv3 technology

To start off, place your barracks, preferably somewhere the enemy will have a hard time getting to. The barracks is your main building, and if it is destroyed, you are kicked out of the game and the attacker gets to take over what's left of your base. (hence the name allyourbasearebelongtous) Next, place down the farm you start with and use the money gained from that farm to buy more farms. A steady income is important, since if you recruit troops, you have to pay them in upkeep, which gets more expensive the more players are in the game (to counteract lag) and if you run out of money, your soldiers will desert you, which means they go out of your control and become AI-controlled. Also, if you die, all of your soldiers become AI-controlled. AI-controlled soldiers will slowly disperse over time (0.5% chance every second) and they can't pathfind, instead charging directly at the closest enemy they can find.

If there are other enemy players in the game, they'll certainly want to raid your base and farms to stop you from amassing enough troops to attack them (or maybe to reduce lag... remember if it's too laggy just raid the enemy base) That's why you need to protect your base! You can do this by buying walls and towers to halt enemies and force them to break down the walls while under arrow fire. Using a unique, free-form building system, it's up to you to design the most impregnable set of defenses you can possibly come up with. You can build everything from castles to fortresses to giant concentric fortifications if you have enough money and time. Just remember that any castle you build is only as strong as its weakest wall!

Assaulting enemy fortifications is an entirely different matter, however. You need to gather up as many soldiers as possible to be able to take down enemy structures. If the enemy has erected a wall around their base, try to find their gate. It's a thinner section of wall that has 75 hp instead of the 100 hp for normal walls. Or if you're lucky, you could find their gate left wide open! Also check for any gaps in the defences that you can sneak through. If you can't find a weak point, then try to find a section of wall with the least amount of towers nearby (so your soldiers don't get shot at as much) and break it down. Once you're inside, you need to make a decision; do you go straight for the barracks to try and take over the enemy base (instead of destroying it), or do you focus on destroying the enemy defences? And if you focus on destroying the enemy defences, do you go for the farms and try to bankrupt the enemy, or do you take out the expensive, fragile arrow towers?

Soldiers also fight each other when they touch, and the outcome of the combat is mostly random, but if you have more soldiers than the enemy, and your army isn't completely comprised of peasants, you are more likely to emerge victorious. Player units can take 5 hits and soldiers and peasants can only take 1 hit. Soldiers and peasants have different stats, soldiers have a 25% chance to deliver a hit, while peasants only have a 15% chance. Arrows from towers also work similarly, with a 25% chance of hitting. Technology levels make a difference, however. When a unit is recruited, its attack is boosted by 1% each technology level of its owner, including peasants.

There are also the rush/boom/turtle strategies, present in all other RTS's. Do you spam a lot of farms early on in an attempt to out-produce your opponents? Do you develop a little bit, train up a small army, then mobilize your farmers in an attempt to crush your enemies before they can build fortifications? Do you find a little corner somewhere and wall up nearby chokepoints in an attempt to deny your opponents the chance to rush your farms? There are also a lot of middle ground strategies. For example, my personal favorite strategy is to find and set up on a nice, defensible spot with a few chokepoints, build a few farms, wall up my base, then go out and raid nearby enemy farms that aren't walled up. Or sometimes I also like to spam farms, then when the time is right, I mobilize all my farmers (1 farm=1 peasant soldier) and zerg rush the enemy base.

Technology is an important part of the game. Without it, you'll be restricted to weak palisade defenses and your units will slowly be beaten by more advanced enemies, even with superior numbers! Each upgrade costs 300 money, to use it, you just need to click with it equipped. Each level increases your units' attack by 1% and your new buildings' HP by 1%. Each technology level also gives you +3 points, so if you can't beat a tough fortification, you can win a peaceful technological victory by amassing technology upgrades.

The top-left island is third-largest and contains a both small and big chokepoints.

The bottom-left island is the largest and contains a mix of chokepoints and open areas.

The top-right island is second-largest and contains a few tight chokepoints, but is relatively open.

The bottom-right island is fourth-largest and contains few chokepoints other than the bridges.

The tiny island at the bottom is fairly open and well-defensible, but it's the smallest.

Game Updates & Patch Notes:
4/29/2019 - added Spanish text as an option
5/11/2019 - added peasants spawn from farms, and fixed a few minor bugs like camera getting stuck and blue gate not being placed properly
5/18/2019 - added technology system that buffs units and unlocks new ones. every level = +1% unit attack and +1% building hp
6/12/2019 - updated game to fix numerous glitches because of modd.io update, added +200 initial money storage regardless of income, construction system which makes buildings take time to reach full hp, also the process of construction takes up money depending on how much max hp the building has, and added a partial money compensation for joining late, latecomers get money equal to highest player's points if countdown is ticking

I created this account to talk about bad games and, rest assured, this is certainly a bad game. The graphics and gameplay is minimal and repetitive, like most .io games, however this game has no redeeming qualities I can find to make the game worthwhile. The graphics are terrible. I'd bet they were pulled up online as .jpgs and entered into the game. The movement is terrible. The flow of the character is laggy and when he hits into trees he has a mini seizure. The gameplay is short. You just build walls, towers, and farms. The elimination idea is interesting, but the developer was too incompetent and kicked people who were eliminated from a server and not just ban them. With a poorly thought out elimination method it makes attacking other peoples bases obsolete. The pvp is god awful also. The base arrows can shoot from accross the map sometimes and, from my experience, it can only hit with 5% accuraccy when a target is standing still. The player attack is simply retarded. You just spin your mouse in a circle and pray to god you hit something. Sometimes you spin in the opposite direction your mouse is going and sometimes your opponent lives on 0 health, you also have a chance of doing nothing or moving left/right. The instructions are no where to be founf, you have to go into the description to learn how to play the game. I'll give you an instrcution for this game, click the x symbol in the tab for the best experience. Half the games mechanics are obsolete like any red materials or technology. The soldiers usually can't even hit the building or person your standing next to. The game looks like it was made from scratch and nobody plays it. I beg of you, keep the trend going and do not play this lazy game.
Log in or Register to Add a comment
Featured Until:
Friday, January 11, 2019 - 14:15