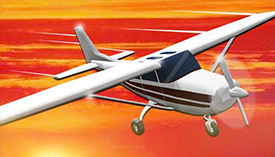 Airplane.io is a game where you avoid other players to collect gems. The operation of the game is very simple, but like most simple games the rules may be easy and they may be quick to learn but true mastery of the game will require a great deal of concentration, practice, and maybe a little luck. This game is not for the weak of heart. It puts you in the cockpit of a classic world war 2 plane of your choice and forces you to fly around an arena in order to collect gems. The gems are important, they are how you score and how you upgrade. in order to progress through the game or even life itself, you will need to focus on collecting the gems as long as you can. The hardest part of the game is the other players. Remember, hell is other players. They are geting stronger and stronger as they compete for the same gems as you and you can be assured that if you were to accidentally fly into an enemy, you would be killed instantly. Thus, your goal is to avoid the other playerssyet still compete with them for gems. Can you do it? Can you become the spitfire of your dreams? The mustang that makes other players shiver? Only time will tell.