Hole in the Wall

Free For All
Classic 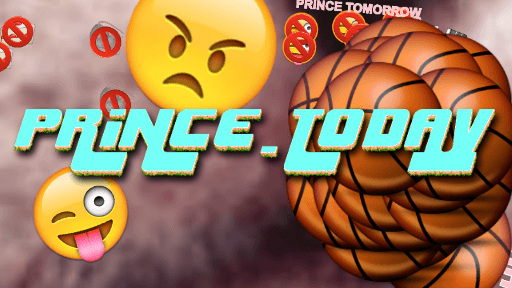 Prince.today is a free-for-all io game where you gain the ability to blow yourself up.

- In prince.today you can blow your emoji up, taking down others in the process. Of course, everyone else in there can do the same, so good luck!

- Move around using your mouse.
- Eat dead players to become bigger and faster.
- To blow up yourself up, click and hold until you explode.
- While blowing up you are immune to other players' explosions, but you're stuck.
- Exploding yourself makes you spin out of control for a short period of time (during which you cannot explode again).
- Exploding yourself WILL NOT kill you, and WILL NOT reset your score.
- Enemy explosions WILL kill you and WILL reset your score, so careful now ;)
- Eating earns you score for the leaderboard.

- The bigger you are, the faster you become and the more particles you explode into, thus improving your chances of taking other players down.
- Eat enough so that you acquire a decent size and speed but don't get too greedy, otherwise it becomes really easy to run into an explosion and die unexpectedly.
- If you become too big and fast for your own taste, just explode to get back to initial size and speed.
- Since you are immune while blowing up, defend yourself by clicking and holding just enough to not actually explode - as you release you will regain control and deflate back into your size, having averted certain demise.
- When players explode they will temporarily spin out of control - take advantage of this and try to take them down while they are at their most vulnerable.
- Taking down bigger players yields more food :) It is also more dangerous as they are faster and explodier than smaller players :(
- Arena edges and corners are usually safer :) There is also less food there :(
- Playing with the red crab has been known to bring good luck. If you see it, use it :D