Free For All
Classic
RPG 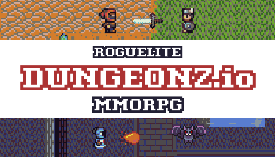 Dungeonz.io is a free-for-all survivor io game where you must fight spooky creatures.

Enter a huge open world of monsters and adventure in this retro style MMORPG.

Train your stats and craft better gear to survive out in the wilderness.

Fight your way through mummies in pyramid crypts, and menacing vampires in their dark castle, to delve into perilous dungeons in search of riches and glory.

But be prepared! Once a dungeon has been entered, there are only two ways out, victory, or death…

Bring your friends along with you to clear dungeons as a party.

Your progress can be saved by using the continue code of your character (top right icon) to continue as that character later!

Pick up item: E, or left mouse click on it

You start with a number of respawn points.

Every time you die, you lose a respawn.

If you die with no respawns remaining, it is game over for you!

Explore the land to gather materials to craft weapons, armour, tools and potions.

With a higher crafting stat (weaponry, armoury, toolery & potionry), the items you craft will last longer!

Items can be bought from NPC merchants in the main city, and around the world, for glory. Gain glory by doing most actions in the game, such as defeating enemies, completing tasks, gathering resources and beating dungeons.

Stand next to a merchant and click on them to open the shop panel.

Tasks are a set of small objectives to work towards during your adventures which give various rewards when complete.

Open the tasks panel in the top left to see your current tasks.

When a task is claimed, new tasks are added.

The creator is usually available on the official Discord server. https://discord.gg/7wjyU7B

Come say hi and say what you think of the game.

Learn more about the game on the official wiki. https://dungeonz.wikia.com