Power-ups
Free For All
Classic
Ocean 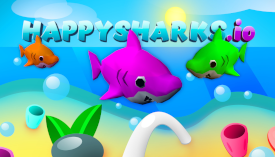 HappySharks.io is a multiplayer iogame. In this game sharks that hunt each other in a giant underwater arena.

Hunt smaller shark and flee from bigger sharks. Eat gems to grow and use boost to initiate an attack or escape.

Don't let bigger sharks eat you! Use boost to hunt smaller sharks or flee from attacking sharks.
Boosting will make you lose gems that you have eaten and your shark will shrink in size. It is wise to only use the boost when it is necessary.
You can bump into sharks that are the same size as you without losing any gems. This can be used to knock sharks of similar size into bigger sharks.
Avoid hitting the edge of the map, it will turn your shark into dust. The dangerous map edge can be used to your advantage if you manage to knock another shark into it.

A red triangle will appear above sharks as a warning that they are big enough to eat you if you get too close. They need to have 50% more points than you to be a threat.
A tip for small sharks want to grow is to swim close to bigger sharks and be prepared if one of them gets eaten. You have a chance to eat some of the gems from the eaten shark and grow faster.

The sound and music can be toggled on or off individually in the main menu or ingame if the gear in the top left corner is pressed to open the ingame menu.

You start as a small shark with 0 points. At this point you can be eaten by anyone with 1 or more points. Having 0 points allow you to boost without any penalty.
The sharks gain points and size by eating gems that are distributed randomly on the map.
If a sharks gets eaten it will drop all the coins that it collected in a circle around the place it was eaten. The size of the circle depends on the size of the shark, a big shark that gets eaten is a great opportunity for surrounding sharks to grow quickly. But be careful since it can get crowded with hungry sharks.
There are two types of gems on the map, round gems that are worth 3 points and fish shaped gems that are worth 10 points.
The fish shaped gems are only dropped on the map when a shark is eaten. The maximum amount that can be dropped from a eaten shark is 500 fish shaped gems.

The hats let you conquer the sea as a wide range of sharks, including a spartan, pirate, king, gamer or even a viking!