Battle Royale
Free For All
Strategy 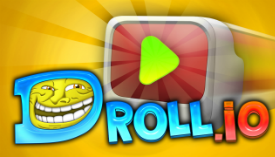 Droll.io is a free quiz game. Solve mysteries by watching popular internet videos in Droll.io! Go through dozens of fun and unpredictable clips, try to guess the ending before it is revealed and discuss the outcome with other players watching the content with you in real time!

The idea behind this game is simple: several players join a lobby and are shown a certain video. It can be a classic cat video, traffic incident footage or any other peculiar situation caught on camera. After watching the first part of the clip that helps understand the setup, the players are given four options of the possible ending. Select the one that you feel is most likely to happen and see if you were correct by watching the rest. If you had the right idea, you will be awarded coins that can be spent on customizing your avatar or to activate certain bonuses like getting rid of two incorrect options in a particular round, buying an extra life or maximizing the