Free For All
Sports 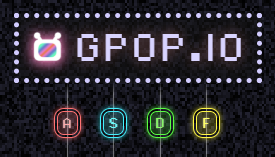 GamePop is a music game about hitting notes of a song. The catch? Players can create their own levels with YouTube videos! When the notes reach the middle of the screen, hit the hotes by using the ASDF keys on a keyboard. Players can create their own levels by finding a YouTube video they like, and by composing the notes for the level. The game draws inspiration from popular games such as Tap Tap Revenge on iOS, OsuMania, and other predecessors of note tapping rhythmic games. The name “gpop” is short for GamePop, and is also a word play on popular genres of music such as “kpop” (for Korean pop songs), “cpop” (for Chinese pop songs), and “jpop” (for Japanese pop songs). A player’s score depends on the number of successfully pressed notes, streaks and the accuracy one would press each note. Once a level is completed, a player can gain experience and level up (it has no perks at the moment, except as a symbol of status). The score can then be submitted to the level’s leaderboard, and a message of under 32 characters can be added. There also exists a global leaderboard to rank the highest-level players.

The game can be played in single player or multiplayer. In single player, a player can choose a level and plays it as often as he or she likes. The player can press [R] to quickly restart the level, or [SPACE] to pause the level. The highest score can be added to the leaderboard. In multiplayer, multiple “rooms” exist for players to join, each with different levels depending on the tags of the songs. In a multiplayer room, players vote for the next level democratically, and play through the level in sync. It is not possible to replay or pause the level, because the players are synchronized. Live standings of the score appear on the left side of the game, while the right side has the current level’s information. The game can also be left in the background simply as a music playlist. It is currently not possible to create a personal room to play with friends, but it is a consideration.

Creating a level is as simple as selecting “Create a Level” from the topbar of the front page. The player needs a YouTube link to load a video. Then, it becomes possible to play the video and create the notes with the ASDF keys. It is possible to restart the whole creation with the [R] key, or delete notes by individually clicking on them. It is also possible to go to selected time of the video by using the progress bar of the YouTube video. Then, a name, a title, a description and a few tags are required to create the level. The created level appears on the front page, and may appear in any of the corresponding multiplayer rooms.

Leaderboards are only available to logged in users. A player can choose to sign up to the game. The perks include being able to level up and being able submit scores to the leaderboards. As a general setting, it is also possible to bind the ASDF keys to other keys on the keyboard.

Here is an example of a player visiting gpop.io: The player arrives on the website. He clicks “Play”, and gets placed in one of the multiplayer rooms, and is able to play whether there are other players or not. The player can go back to the front page, and scroll down to see all the recently created levels, and can choose a few to play. Players often like to master one level, so it happens that some levels are dominated by one person in the leaderboard.

Overall the game is casual and simple, can be played in single player or multiplayer. There is plenty of room for future updates such as having more types of notes, as well as other gamemodes.

Game Updates & Patch Notes:
Version 25/01/2020 - Added The "More IO Games" (It has always been on the topbar)
Version 1.8 - Ratings and Comments! (2020-02-07) - frontpage general change - added a rating system - added a comment system (this update in the end) - added a most played/top rated of the week/all time to the front page - fixed disconnect bug
Version 1.9 - Level Sorting and Notifications! (2020-02-20) Here are the changes: - Your account stats will now be displayed on your frontpage - You can now favorite levels by clicking the heart - find everyone's created levels by clicking on their username - sort through all levels by tag by clicking on a tag - A list of best recently created and all time great levels is available - You can rate levels in rooms - You get notifications for comments, ratings and getting beat on the leaderboard!