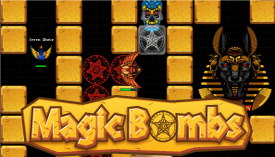 Welcome to the ancient and dangerous world of magicbombs.io. Venture into the pyramid of fear and fight off skull baddies, other players, and a variety of maze-based obstacles. This is a free, real-time multiplayer io game similar to the classic 8-bit strategy game, Bomberman. There are two modes to play: First, you can just join randomly and play against other real live players from around the world. In free for all (FFA) the arena will be bigger and more competitive. Second, you can start a private room and invite up to ten of your friends and enemies for a private one on one style battle. This is a strategy game where you will test your mettle against the anonymous hordes of online gamers who are dead set on picking a fight and winning. Do you have the tactical know-how and strategic vision to win against the world? Prove it.

- private rooms up to 10 players

- keyboard: use Arrow keys (or W-A-S-D) to move, SPACEBAR to deploy bombs