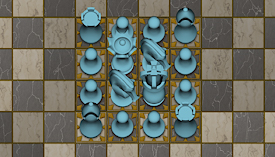 If you are having difficulties getting into the game, try a hard refresh (ctrl F5 in Chrome, Crtl Shift F5 in FireFox) to clear the old version out of the cache.

Any and all feedback is really appreciated. Thanks.

Megachess is a many player turn-based strategy game based on classic chess!

Rules are much like in normal chess with a few exceptions.

Scores are as follows.

Players also receive 1 point per turn if they are alive at the end of that turn.

As a player, you will be put on either the black or white team, but your pieces will be given a random colour to help identify you and other players.

Movement is simple: Click on a piece you wish to move and if it is your turn, you have moves to spare, and that piece hasn't already moved that turn all the squares where it can move to will light up. Simply click on a highlighted tile to move, or click anywhere else to deselect.

This project is new and I don't publish things very often but if people start playing it I plan to add a few features that you might be interested in. Primarily I'll be adding statistics and user accounts so you can keep track of how good you are and other interesting statistics.

Also, I know that this game has a few bugs with Firefox, which I'll be working on now. But its fully tested and working in Chrome and Chrome on android. (tested on a Samsung s8+)