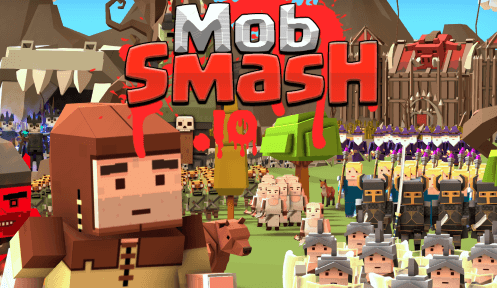 MobSmash.io is a free-for-all io game where your goal is to outwit and overpower the other mobs.

Fight other players and grow your mob strength & size to the top!

collect gold from your victories and spend it to upgrade your mob powers or unlock new mobs.

Load the game and type your player's name in English.

Pick a mob from the main menu.

Attack: Stop holding left click near an enemy. (each mob has its own attack range)

Stop Attacking: Move far away from the enemy.

Collect 100 gold and buy new mobs from the "Mobs" menu

Start by fighting weak animals in a small horde (attack 2-4 animals in one fight),

try to avoid other players while your mob size is small.

after your mob grows to 25-30 units, attack stronger animals

like wild boars & bears (for maximum XP and score points).

the bigger your mob the better chance you have against other players...

you will get other players XP, so killing big player mobs is very gold & XP rewarding.

TIP: think when to use your ultimate ability, it can decide the course of a battle.