Free For All
Agario Style
Strategy 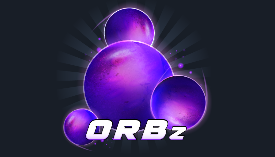 ORBz is a game where your character have 3 orbs rotating in a fixed orbit. Each of these orbs cause damage to enemies during contact. At the same time, you can receive damage from other players if their orbs reach you.

You start with 100 health points. While you move around, you will find figures that when you pick them up will give you one health point. You will have to collect multiple of these until your orbs will become strong enough to kill other players.

While you play, your character and orbs will get bigger depending on your health. If you are bigger other enemies can hit you easier, but your orbs become bigger too, dealing more damage per second during contacts.

You can also control the orbit distance of the orbs (the distance from your character to the orbs) making it farthest or closest if you need it. This comes with a side effect, expanding the orbit will slow you down but giving you a chance to catch players far away, while contracting the orbit will make you faster to escape from other bigger players.

The three orbs rotate at a constant speed, slowing down the bigger you are.

At the end of a match (when you die) you will be awarded with an amount of XP and coins that you can use to buy skins in the shop.

There are two types of skins: common skins, which can be unlocked only by leveling up. And premium skins, which you can buy with the coins you earned playing (these can also have a level requirement).

Also you can customize the color of each of your orbs using the color slider in the shop.

In game you will find the "Arena Leaderboard" this leaderboard includes all the players which are in the same map with you while playing, the number that appears at the right is the health that each player have.

Outside the game, you will find the global ranking of all the players (https://orbz.io/leaderboard). This leaderboard shows the best players in the game. You can select different categories: ranking score, most kills, most damage, and most time in in-game leaderboards. Ranking score points can be obtained by playing and you will get more the more you fight with other players.

The leaderboards also split in different time frames, you can list the best players in the last month, week or day and of course the all-time leaders.