Power-ups
Upgrades
Free For All 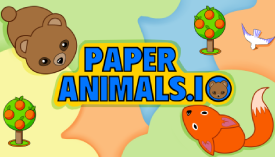 PaperAnimals.io is a free iogame. You've played paper-style games before, you've played animal-style games before. Now, it is your chance to play Paperanimals.io, a game where you are an animal made of paper who is on a death-defying mission to capture as much territory as possible. You know the mechanics but you don't the whole story. This time around you're trying to capture territory not only to win the game but to unlock new heroes and each new hero comes with its own skill and special ability. Remember, in this game, you'll be trying now the new word in the world of io games in the capture of territory. We play as cute animals, each with its own skill. Play, win and unlock new heroes!

How to play PaperAnimals.io
PaperAnimals.io is a game that attracts with its beauty and inner content. Our task is to capture the entire field in which we find ourselves side by side with other animals. For combat victories, we will be able to unlock new heroes, which is great, because everyone has their own unique skill. For example, a wolf. Look at the paw marks around him. If you click, the skill is activated. The wolf in PaperAnimals io has this acceleration. It recharges over time, but still, you need to use it in the most critical situations.
To survive, you cannot cross your own path, as well as crash into the edge of the map. Use the slowdown of the enemy when he attacks you to your advantage.

Learn the trickiest fighting techniques in PaperAnimals.io to defeat your opponents for sure and take first place in the rankings!

Controls:
The hero follows the cursor
Click to activate the skill