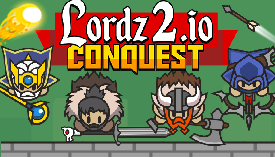 Lordz2.io is a multiplayer tower defense game set in the time of kings, lords, and wizards.

Lordz2.io: Welcome to Lordz Conquest, the new strategy .io game in the world of Lordz.io.

Build the biggest army to take over the map, and conquer new territories to expand your kingdom and unlock the best HEROES !

- HEROES System with special POWERS, - CAVALERY units, - Tons of new buildings to unlock new soldiers, - WALLS !! (Build walls to protect your base from other players) - Advanced FORMATION system - and more!

Clic on a building : Attack this building

First build a Castle. Once you have a Castle you can recruit basic Units in the Units Menu (U).

Build a Stable to get Cavalery units, Academy for Mages, and Monster Den for Dragons.

Build Archer Towers or Mage Towers and upgrade them to defend your base, and build a big Wall all around it to be even safer!

You can win a lot of Gold and Victory Points by destroying other players buildings. If you win enough Victory Points, you will unlock new territories in the Conquest Mode.

HINT : Use the Formation system to position your soldiers inside your own army. For instance if you want your archers to be in the center of your army to protect your heroe, or on the ouskirts of the army to have more range ?