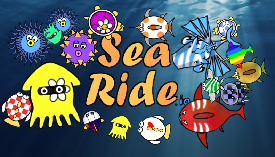 Sea Ride is a free iogame. Welcome to the deepest depths of the farthest sea. A world of pure adventure and imagination. A world of danger. Sea Ride is an iogame where you start small and eat your way to the top. Gobble up other fish and smash open different crates to unlock powerups that let you attack from range. Move fast and be a tactical genius to avoid the other fish as you swim your way.

Sea Ride is a game where you collect powerups to improve your stats and get more powerful. The hazards are not just other players, but urchins, bombs, and crazy events take place. Use anemones to protect yourself. Level up as much as you can during the main game to improve your chances of dominating the final mini-game!

Attack enemies by charging your boost and slamming into them from the side or the back. Slamming head-to-head will parry, so get around them to land your blows to their body. Hitting them in the back does the most damage.

Alternatively use the arrow keys to rotate, spacebar to brake/charge boost.