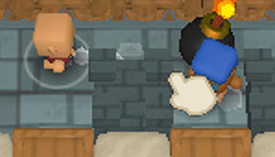 Bomb Town is an explosive multiplayer battle arena game with 3D graphics. The bomberman is here, the bomberman is now. This is the first browser-based bomberman MMO to ever make its way to the competitive arena of online gaming.  This is an isometric, 3-d, cartoon bomberman game where you will begin by customizing your player avatar. Choose everything from their hair, to their facial expresions, skin, tone and other personal tidbits. Then as the game progresses and you rack up victory after victory you will be able to cash in those victory points for items froim the in game store. These items will allow you to add further customization to your character. These customizations will effect not only the look and personalization of your player avatar but the overall effectiveness of your player when in they do battle in the arena section of the game. That is right, there is a PvP arena! And it is basically everything you've ever dreamed of and posibly more.

The goal of the game is to user your skills to slowly grind your way up the ladder and eventually becom the strongest bomberman. Various upgrades and items will be made available to you the player in the game as well as enhancements for your stats and abilities tha you can earn by simply leveling up throughout the game. You will be given the opprotunity to gain experience points by continuously playing matches either with a group or against other players from all over the globe. This is truly a massively multiplayer online role playing game. And that is why there is just so much to do in bomb.town,make friends by chatting and socializing in the local pub (still in beta), or continue to customize your own, unique character at the games barbershop or by interacting with NPCS (coming soon),Soon you'll also be able to  purchase upgrades (coming soon), and be given the opprotunity to take on quests which you can solve for a prize!