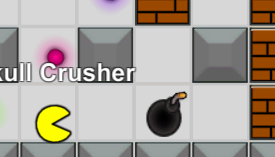 Dumbgame.space is a free iogame.  Welcome to the maze, get snacking, drop some bombs, and see if you have what it takes to survive. This is an original and unique take on a few of your favorite games. But instead of fighting the maze or programmed AI enemies, you'll be going up against dozens of other players from around the world and in real time. Thrill to the strategy inherent in executing your strategies for dropping bombs, blowing up walls, and grabbing the goods. You will make fast tactical decisions that will effect your ability to move without being trapped and succeed. Stay frosty because as you venture further and further into the game you're going to be trapped behind brick walls that appear out of the vapour. Make sure to save some bombs or its bye bye! This is a 2D multiplayer action game. It takes the best from games like Packman, Bomberman and gives you fast-action gameplay. Packman characters fight against each other on a 2D battle arena using bombs. This is what multiplayer was invented for.

Control your packman with the mouse, left click is used for placing bombs