Free For All
Classic
Maze 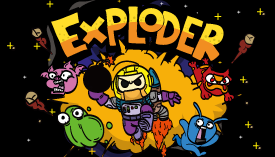 Exploder.io is a free IOGame. This game is a masterpiece of pixel-art and welcomes you ith open arms into a classic multiplayer game based on the classic Bomberman. It's focused on PvP. A player needs to survive on the maze-like map and fight other opponents and monsters around them. On the map, there are tons of power-ups to acquire and increase your chances of winning! The game is easy to start out with and understand, but you need to invest a great deal of time to really get familiar with all the tricks and strategies to maximize your potential!

The game works both on mobile and desktop browsers. On mobile, you can choose either portrait or landscape mode, depending on whichever you feel more comfortable with.