Power-ups
Team
Free For All 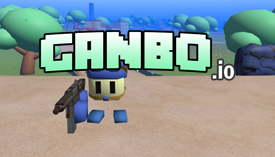 ganbo.io is a Massive Multiplayer Online Third Person Shooter, an exciting new take into the .io genre, something totally unique and refreshing, and it has just entered its first public phase!

In ganbo.io, you'll be set in a cute, colorful world where two teams 'Red' and 'Blu' are fighting for supremacy on the great island 'Seaside Chance'.

You'll have two weapons at your disposal at the moment, for an assault class. Those being an high performance Assault Rifle and a quick scope Pistol, which is kinda overpowered!

Take onto the green plains of ganbo.io and supress the enemy team with your own teammates, cooperate and defend each other in this war at big scale!

This is world at war with the Red and Blue army trying to take control of this great island, and who knows what else? Let's adventure and follow the adventures of these little dudes trying to fight for glory!

How to play:
- Move around with W,A,S,D.
- Left mouse to fire.
- Hold the right button to aim so you have better accuracy in the distance fire.
- Space to jump.
- Shift to sprint!
- 1 or 2 number keys to switch between your two available weapons at the moment.

Explore the great Island Seaside Chance and bring your team to victory!

Oh, and be careful with the sea, these little guys can't swim!