Free For All
Diep Style
Shooter 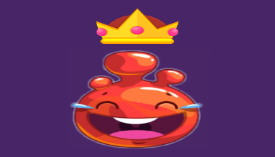 JelloBomb.club was originally launched back around early September of 2018, but wasn't shared well enough as of early December of the same year it only attracted a total of 2,169 due to our poor sharing habits which we're now trying to change. JelloBomb.club is developed utilizing the Phaser 2 framework created by Richard Davey. Super long story short -- it's pretty simple to play! Just hit the arrows under Unlock Skins!! and cycle through the bright n' colorful yummy lookin' jello-filled characters that you can battle of your enemies with in this FFA bomb throwing madness. Players are to compete to claim the #1 spot on the Leaderboard. In addition to achieving the #1 spot you'll get a nice gold crown that'll appear and float above your characters head as long as you can hold the #1 spot, otherwise the crown will be snatched away from your grasps and given to the next person with the highest score on the Leaderboard.

The one who score the most points in JelloBomb.Club is crowned until it's snatched by someone who holds a higher score than yours! You can receive points by staying alive and bombing other players with a single explosive and fiery hit.
Remember you can throw your bombs using your mouse. Just aim at your competition and smash that Left-Click button on your mouse!!

Oh! You can also receive points by collecting the multi colored Jello blobs that spin around and around. PRO-TIP: Once you collect a Jello blob, you're screen will shake and you'll lose the ability to aim properly!! Make sure you're not surrounded by opponents when you collect a Jello blob because the screen shakey shakeyness will corrupt your ability to aim and your fight for survival will get difficult! By the way, another thing you can do is chase the players who you see collecting jello blobs and kill them when they're most vulnerable! He-he-he!!! ;)

Game Updates & Patch Notes:
GAME UPDATE: We've added a pretty nice music track in the game. You can turn it on or off with a simple click of the purple buttons located at the top left of the game.