Upgrades
Free For All
Slither Style 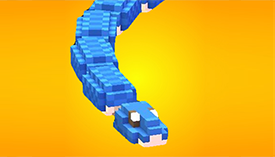 Snaker.io is a 3-D, slither style game. Jump into the pit and take on a world full of slippery enemies in this massive multiplayer online game that features head to head action. Try not to swallow your own tail as you slither through a perilous pit filled with opposing playes from around the globe. You'll collect power pelles as you slither around znd use them to grow your body. Trick other players into smashing into you in order to gain points and become victorious! This is a game of tactics and strategy. Only the smartest and most devious snake will survive. Smash your enemis and feast on their remains! It is a snake eat snake world out there, after all! Slither, smash, grow, and win!