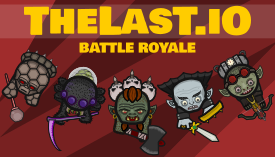 Thelast.io is a magical survivalist io game in a 2D environment. Welcome to thelast.io, a fantasy themed battle royale. In this game you will battle using melee, magic, skills, and your wits to be the last survivor. CONTROLS: Movement: WASD Aiming/looking: Mouse cursor Attacking: Left Mouse Button Interacting: E Switching weapons/items: 1-6, mousewheel, or clicking on the inventory slot. Jumping off dragon and descending more quickly: Space Use accessory: Space Open Map: M You will begin the match in the nest. From the nest the dragon will fly over the map and you can jump off using the Space key. Once you have landed you must battle for your survival. You can open chests and doors using the E key. Good luck and may you be the last.