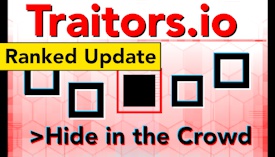 Traitors.io is a top down stealth based shooter played in rounds.
-Hide in the crowd of decoys and strike at unsuspecting opponents.
-Use a wide variety of powerups and stage hazards to outwit and outstealth your opponents.
-Games can range from tense 1v1s to epic 8 player arenas.

Gameplay:
-You begin the game with 10 bullets.  Bullets recharge slowly over time when you're not shooting.  Beware however, that shooting will reveal your position to all your enemies.
-Every 35 seconds, all real players will be highlighted along with 3 decoys.  Even if there are more players in the game, exactly 3 decoys will always be highlighted.
-If you manage to kill a real player, your range will be increased indicated by your range ring getting larger.
-When a player dies, their name will grey out in the upper left corner.   When all other players are dead, you win the round.  First to four wins the match.

Strategy:
-Hiding in a 1v1 is usually the better choice.
-In larger games, it can often help to play more aggressively.
-Try to pick off opponents near powerups and then grab them for yourself.  Get a kill and then use a stealth powerup to fade back into the crowd.
-Some combat powerups like shotgun and rapid fire have insane power.  Prioritize getting them at all costs.

Bots:
-Bots having been coded from the ground up to play like real players and be fun to play against.
-Bots never cheat and only remember what players do on screen.

Invis (Blue)
Spawn Rate: 30% (has an additional 75% chance to be the first powerup until round 3)
Effect: One time use: Turns the user invisible for 7.5 seconds. When the user reappears, 2 decoys are also spawned randomly on the map.

Blackout (Black)
Spawn Rate: 2%
Effect: One time use: Hides the game for a short time

Combat Powerups:
Shield (Green)
Spawn Rate: 19%
Effect: Grants the user a shield which will absorb a single shot and lasts 30 seconds. Also protects against poison. Does not protect against again death zones. Should it?

Range (Purple)
Spawn Rate:11%
Effect: Increases the user's shot range. Stacks with other shot upgrades. This is the same bonus granted when getting a kill. Shot range has no upper limit.

Shotgun (Red)
Spawn Rate: 5%
Effect: Turns the user's shot into a shotgun which shoots 6 shots in a cone. Stacks with other shot upgrades.

Reveal (Red)
Spawn Rate: 3%
Effect: One Use: Highlights all enemies (no decoys are highlighted) for a long time. Highlights are visible to all players. User is not highlighted.

Super poison shot (Dark Green)
Spawn Rate: Cannot be one of the first two powerups. Cannot spawn until round 3. Can only spawn once per game. Super rare!
Effect: Adds an area of effect poison explosion wherever the user's bullets land. Decoys and enemies caught in the explosion have 10 seconds to live. Shielded enemies are protected from poison. Bullets will still land and kill as normal.

Reveal Threats: Highlights all players and 3 decoys for 6 seconds.
Spawn Rate:  First in round is 18 seconds then 35 seconds until round end

Powerup: Spawns a powerup after a 5 second spawn animation at a random location which is more likely to be in the center. If the game's walls have started to close, the powerup will always be directly in the center.
Spawn Rate: (20 - 50) seconds (speeds up in later rounds min: 20 seconds)

Death Zone:  Spawns a slowly expanding zone which kills all real players and then collapses. Each zone which spawns will larger than the last.
Spawn Rate: (40 - 100) seconds (speeds up in later rounds min: 19 seconds)

Mini Death Zone: Spawns a slowly expanding zone which kills all real players but does not collapse. In later rounds, more will be spawned at once.
Spawn Rate: (70 - 210) seconds (only about 25% of games will use mini death zones)

Scan Bar: Spawns a falling zone from the top which highlights all real players it passes over.
Spawn Rate: (30 - 150) seconds (only about 40% of games will use scan bars)

Invis Field: Spawns a blue zone which hides all players and decoys inside it.
Spawn Rate: (45 - 200) seconds (only about 25% of games will use invis fields)

Walls close in: The walls of the game start closing in. Decoys can pass through the walls but players cannot move beyond them.
Spawn Rate: (100 - 200) seconds (speeds up in later rounds)