Upgrades
Free For All
Shooter 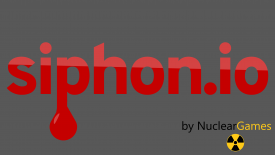 siphon.io is a deathmatch-like game where players must finds items to fight off other players to be the last one standing. Players all start of with nothing but a hammer to build with and fists that they must use to break crates and get items from. The players can use these items to eliminate other players, heal themselves, or to add more uses in the items. They can also build wooden walls they get from the wood of destroyed trees to protect themselves. There is also a storm they must avoid that shrinks every 60 seconds and lasts for 30 seconds. This mean the players make sure they survive, fight, and move to be the last one standing.

How To Play: When first starting, players must be ready, for it is a 3 second countdown until the battle. Once in, players must go in a house or outside and break crates using their Fists and pick up the items that dropped. The items deal damage, heal, or add to a players bars, such as wood and ammo. After this, players must survive against other players against them and the storm. The storm moves every minute and lasts 30 seconds. Players must survive and fight against other players but also has to stay on the move because of the storm. This lasts until one player is left, where they gain Wins. They can buy coins or use coins to gets in-game skins, such as clowns, zombies, inmates, and 17 other skins for Season 1 (Coming soon). However, over the course of time, changes in the map will start to appear, signifying that a new season or event is about to start. These may or may not make the game more challenging. After a round, players are in new positions with a 3 second countdown before they start the battle gains.

Gameplay: In Season 1, there is not much going on. This is a season where the game is supposed to be enjoyed and played. However, players will start to notice subtle changes around the map. Such things could just be a missing block from  a house. But things like this have an important significance.

Background: Fair Play HQ also provided another Battle-Royale game called "Farmlands Royale." The game had over 10K+ plays and over 5K+ daily users. Fair Play HQ was inspired to make a game better, so they came up with this game to provide players a fun and challenging game. The total production of 'siphon.io" took around 3 months. The game already has over 10K+ plays, and also has very frequent updates. This is a game not worth missing out on! Enjoy!