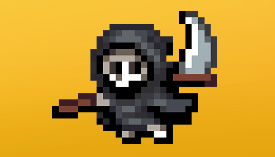 EQUIP YOUR GUARDIANS: Choose dozens of different abilities to use in battle from creatures to magic spells to weapons and buildings. Choose your abilities wisely to match your Guardian, your play style and your game mode.

RULE THE LEADERBOARDS: Earn rewards as the top ranked player on the leaderboards. Competition is stiff, but the rewards are significant!

FORM ALLIANCES: Form a long term alliance with other players, battle together, and earn even more rewards.

COLLECT AND UPGRADE: Play as one of over a dozen Guardians. Some are familiar: the Wizard, the Warrior, the Rogue, and the Archer, others are more surprising: the Falconer, the Ice Princess, the Poisonous Tracker, the Reaper, and more. Each Guardian has unique attacks and abilities and can be leveled up and outfitted with awesome skins.

How to play Last Mage Standing: