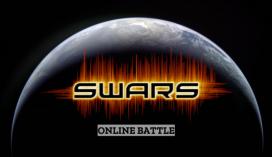 Swars.io is a 2-d shooting game set in space. In Swars.io you'll take control of a space ship armed with laser blasters. You'll be assigned a team --either red or blue-- and you will all work together to destroy the opposing team. The goal of the game is to collect the floating, multi-colored air gems in space and then deliver them safely to your home base and accomplish this in greater numbers than your opponent.  At the end of the game, the team who gathered and mined the most oxygen will be considered the winner. From there, the statistics of the players will be evaluated and those who got delivered the most air shot down the most opponents, or avoided death the longest will be given extra points and rewards. The game is a 2-D top-down shooter but has realistic gravity and space effects. For examples you can't make sharp turns or stop on a dime, both your turns and your stops would require you to prepare for the large arcs when navigating. Additionally, your gun has rapid-fire and must be aimed by positioning your ship directly at the opponent. This requires great skill and a little luck.  You can employ certain tactics in order to stop your opponent from defeating you. For example, they win when they gather more oxygen. Thus, your job is to gather more oxygen or stop them from being able to deliver oxygen to their home base. Perhaps, split up your team into aggressive attackers and resource managers. There is a lot of room for strategy in this otherwise simple looking game.

Each ship has its strength, health which is equal to 1000 units. Health can be replenished during the game with special objects.

Each ship has weapons on board, with which it deals damage to the enemy. Be careful damage to all ships, including allies. The damage for each shot is random and can vary from 10 to 50 units.

When the ship has no health left, it is considered destroyed and will be able to continue the game only after a delay of 10-20 seconds. If at the time of the destruction of the ship on board were not delivered airs, they fall out and can be mined again.

One game round lasts 10 minutes, during which time the teams get air to their bases and prevent each other from doing so. The rest of the time until the end of the round is displayed at the top of the screen.

Players and teams are displayed on the map in red and blue colors. Your ship is displayed in yellow.