DAUD.io - Blast everyone with your giant fleet! 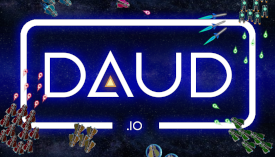 Your ships go towards your mouse - move your mouse across the screen to control them.
Press space or click the mouse to shoot
Press S for a speed boost - but beware! You lose half your fleet doing this!
Bullets that hit other players give you more ships!
Kill other players to gain points
Missile power ups make you shoot homing missile - use them wisely

Fleet speed depends on number of ships - smaller fleets are faster
Bullet speed is also modified by ship size
Circular barriers destroy bullets, use them for cover
Red arena borders slow down your ship - be careful of them
Use splitting to flank your opponents
Position yourself wisely to trap your opponents between other players
Homing missiles can be shot down by normal bullets
Spread your bullets in an arc to hit more enemies, or concentrate your bullets to deal more damage in a smaller area.

Daud.io is a fleet-based space combat game, where players are pitted against each other in a free for all arena. The game’s skill-based combat system involves accumulating a fleet over time by attacking enemies, then leveraging the individual directionality of your fleets bullets to outmaneuver your enemies and destroy them. Each player begins the game with a small fleet of basic ships, each controlled independently by your mouse pointer. By destroying enemy fleets and collecting special power ups, your fleet grows in power, allowing you to take on the most difficult foes. Size isn’t everything, however, and through our unique combat system, a small fleet in the hands of a skilled player can easily overpower the largest armada.

To begin your journey in the daud.io arena, start by focusing your efforts on the smaller ships flying around the arena. Use these to grow your fleet. Be wary of other players while your fleet is too small, as they can easily take advantage of your small numbers to destroy you. As you grow your fleet, leverage the power ups scattered around the map to gain an advantage over your foes. Each ship in your fleet moves individually towards your mouse, so to best stronger players you will need to utilize different bullet spreads to both weaken their numbers with larger volleys, then finishing them off with concentrated bursts.

If you have any questions or feedback, feel free to head over to our discord server or subreddit. Links to both can be found on the intro screen of our game.

Now, we would like to take a minute to thank our sponsors, of which we have none. If you enjoyed this game, please tell all your friends, and take a minute to reflect on the availability of Indian Ocean based web entertainment. We hope you enjoy this artisanal electronic gaming experience if you decide to partake in our creation. We hope you have a wonderful day, and please enjoy your flight.