Team
Free For All
Strategy 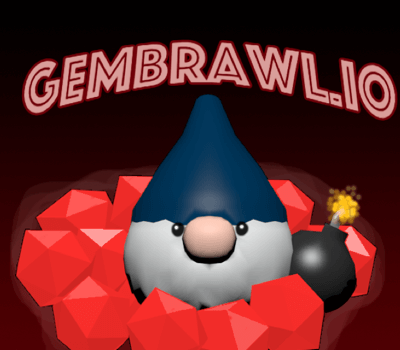 GemBrawl.io is a team-based strategy io game where your objective is gems! The gem mines are in chaos! Every gnome wants to be the richest one, so they are scavanging gems as fast as they can and blowing up everyone in their way. Now it's your turn to enter the mines and show the other gnomes who's the boss!

Gems give you 5 points each, and they re-spawn after a while. Green medikits will restore your HP. Killing another gnome gives you a fraction of his score.

You get score for either collecting gems or killing other players with high score. A good tactic might be to run around looking for forgotten gem spawns. You could also conquer a room with lots of gems with your firends and prevent anyone from entering. Or you could run around killing other gnomes.

Throwing bombs can be tricky but mastering it gives you an edge in fights. With good timing you can throw a bomb and run after it without being damaged by it. This is a good skill when chasing other players.

The minimap can be useful when planning your strategy, or even in combat. Someone approaching you in the tunnel? Activate your bomb at the right time and you'll have the upper hand.