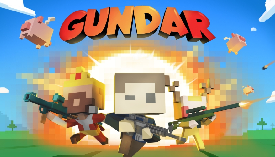 Gundar.io is a first-person arena-style game. In Gundar.io everything is destructible. There is nowhere to hide that the enemy can't blow up, there is nowhere to snipe that can't be sniped. Everything burns. You can build bases, walls, and weapons: but they can be destroyed. You can gather new and more powerful weapons but you'll have to know how to use them. This game may use the block pixel graphics most reminiscent of Minecraft, but don't be fooled: this is no kids game. Gundar.io is a tense, in your face game that will test your every skill and get on your last nerve. You may think you're up for the challenge but many warriors thought the same and all of them fell before the might of chaos. Gundar.io is a fulfilling game because your choices matter and the skills you will develop actually come in handy. Playing gundar.io is about more than shooting, it's about more than leveling up your weapons. Gundar.io is about teamwork and strategic planning. The bases you build and walls you put up might get shot down easily, but ultimately if you play your cards right that won't matter. Think strategically and act tactically. This is Gundaar.io. It's ready for you, are you ready for it?

The game is a 3D game where everything, terrain, buildings, and everything you interact with is destructable. You destroy things to earn blocks which gives you the ability to build stairs, walls, jump pads and other building items to help, navigate, trap and protect your base.

Gundar.io is a multiplayer arena game where you have to destroy the other team's gem before they destroy yours. Each round has 10 mins to play, the highest health base wins.

Yellow and red teams fight on either side of the map. You can see your teams yellow or red beam in the sky for the location of the gem. Both teams earn team blocks these team blocks are collected when you destroy things. For every 10 blocks destroyed you earn 1 team block that anyone on the team can use.

At the beginning of the game, there is a wall blocking the center of the map. This wall will drop over the first ~1:30 mins of the game. Giving you time to build your defense, set traps, or prepare your attack.

While playing you will earn coins you can spend your coins on new guns, gun skins, player skins and a lot more options to come. You can earn these coins by accomplishing feats for every 1000m run you earn a coin, x blocks destroyed, 1 player kill, and many others.

In-Game
Primary weapons - These shoot and damage other players, but don't hurt the terrain | Many different options; sniper, crossbow, flame thrower, etc
Secondary Weapons - These hurt everything, and destroy everything | Many options to come; RPG, Grenade launcher, etc
Buildings - Three defense options and one utility
Destruction - Everything is destructible
Bush - if you stand still you'll turn into a bush (p.s. this is a method of hiding, no one can see your name or your health when you're a bush)
Accounts - Auto accounts are made when you first open the game. To lock in your account so you don't lose it, go to the shop in the main menu and sign in with google. This way if you ever lose your account you can log in again and claim it back