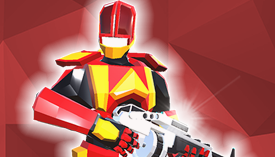 REPULS is the best io shooting game to date. Drive mechs, use grappling hooks, drive vehicles, coop with your friends in capture the flag or control the map. Repuls is basically venge.io or krunker.io on steroids.

Use WASD to move about and the SPACEBAR to Jump.

Look around using your mouse and FIRE your weapon with the Left Mouse Button. You can also press [ Q ] to BASH your enemies with a powerful Melee Strike if they get too close.

Press [ 1 ] to Swap between your Primary and Secondary Weapons and press [ 2 ] to use your Equipment. (frag grenades by default)

Dont forget to use the Right Mouse Button to AIM when using Rifles.

In repuls, your weapons stay accurate no matter how you move. Make sure to sprint, strafe and bunny hop your way to victory.

Every weapon on the battlefield has a purpose. Trying to use the wrong weapon in the wrong situation will guarantee your demise.

Most players also die when they run out of bullets in a gun fight so, as the great call of duty games have made famous: "Switching To Your Pistol Can Be Faster Than Reloading" - consider switching to your secondary using by pressing [ 2 ] if you run out of ammo in the middle of a fight.

Smaller weapons may be weaker but theyre faster to switch to and can save your life when your'e in a pinch.

Also, remember that if your enemy gets too close, you can bash them with your weapon by pressing [ Q ].

Use your equipment by pressing [ 2 ]. Equipments vary from explosives like frag grenades to tools such as portable jump pads.

Different maps may have different interactable objects such as portals, explosive objects and gravitational lifts. Knowing where these are and how to make use of them can help you turn the tide of a fight.

You'll need more than great aim to win in REPULS. Pay attention to the weapons of yourself and opponent in each battle including your positions, a smart player with a pistol can take out a dumb player with a rocket launcher if he outsmarts him.

Sometimes knowing the map can be the difference between a skilled warrior and a noob. Some weapons can dominate if you utilize them in the right areas of the map. The shotgun may be useless from a distance but within tight corridors it outpowers even sniper rifles. Weapons and powerups also spawn on the map. Knowing where they are can help you turn the tide of battle.