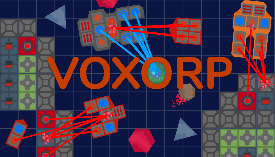 Voxorp is a multiplayer spaceship battle game. Move around the map by using WASD or the arrow keys. Click and hold on resources to mine them, this gives you xp. Once you have enough xp you can level up, this will give you a new ship and a selection of new modules for your ship. Modules are how you upgrade your ship. Drag them from your inventory to one of the module slots in your ship to equip them. Each module performs a different task (e.g. mining, attacking, speed boost). By adding a variety of modules to your ship you can unlock more functionality and cool new features. The goal of Voxorp is to generate score and climb the leaderboard. To do this you need to build a base!

The toolbar at the bottom of the screen contains the buildings you can use in your base different buildings having different prices, make sure you have mined enough resources before trying to purchase them! Click and drag the buildings from the toolbar onto the map, you can place them on the grid in the background. So, what are these buildings I speak of?

Now you may have settled down in a nice little base, got some scorers working but watch out! Other players can attack you and your base. If you are killed by another player then you will lose your ship, modules and everything in your inventory! If you choose to go on the offensive, and kill other players, you will be pleased to know that killing players will reward you with xp!

I hope you enjoy Voxorp!

Game Updates & Patch Notes:
Alliances, Crates & Redesign - v0.3.0 New Features -Alliances! Team up with other players, create and defend a shared base and wage wars on other alliances -Crate - New building! Store up to 500 of an item in a crate, great for sharing resources in an alliance or storing items you don’t want to lose in a battle. Crates will also automatically fuel adjacent dynamos -New ship for level 10 -Website redesign - UI has been rebuilt from the ground up! -Weapon Module Level 3 had been added Changes -Respawning will keep half of the XP you previously had -You can now zoom in and out using the scroll wheel -Moving a module from one slot to a different, already occupied slot will swap the modules instead of moving the occupant module to the inventory -Levelling up again after not selecting a reward for your previous level up will queue your new reward choice instead of replacing your pending one -Meteors can now be mined with standard mining lasers - although their long mining time will mean you are gonna need high level modules! -Turret price reduced (30 red > 20 red) -Level tree redesign - just to shake things up and try to balance the game a bit more -Dynamos require less fuel - cost of fully refueling a dynamo halved for each resource -Heal module now also heals other players if they are in your alliance -Map size increased by 10% -Multiple servers and load balancing
Chat, Heal Module & Balancing - v0.2.0 Major Changes -In-game chat, press “t” to chat to other players in the game, messages appear above player ships -Heal module, heal buildings and other players -You can now remove tiles by holding left click on them (without a heal module in your ship) Minor Changes -Bases are now removed from the map when a player leaves the game (note that bases are only destroyed when a player leaves - not if they die and respawn) -Larger ships are now slower and less manoeuvrable than smaller ones, making it easier for lower level players to avoid them -Cannons have a reload time (1s) -Altered rewards for the level system -Slower to level up at higher levels -Ship health increases with level -Level 2 & 3 modules have darker colours, laser beams & particles. Just for some more variation! Fixes -Issue with respawn link resolved -You can no longer place buildings on top of each other -Projectiles destroy themselves on impact with map border Changelog is also viewable on the website https://www.voxorp.com/changelog.html