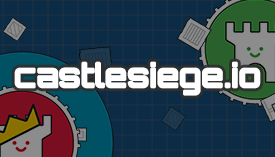 Castlesiege.io is a free iogame. Welcome to the dangerous world of Castlesiege.io medieval-style multiplayer combat game. You will spawn in the middle of an arena with nothing but your crown, your castle, and the sword you'll need to defend both. Hack and slash your way through opponents but don't go too far. You'll need to fend off your castle from deadly invaders who want to usurp your kingdom and replace it with their own. Venture out into the world and kill some crates in order to level up your various stats.  You can increase your overall health bar, as well as heal from attacks, increase the rate at which your health bar will regenerate, increase how fast your little king moves around the arena, increase how fast your little king can attack, as well as increase the amount of damage your weapon will do during these attacks. Finally, you can also upgrade your castles defense systems which will allow you to venture into the arena and take down your opponenets. Destroy your opponents while defending your castle to become King of the realm!

Kill other players by attacking them directly or by destroying their castles.

Increase your level by killing players, their castles, or crates.

As your level increases, you gain special points which can be used to upgrade the following:

You start out with a stick, but don’t be discouraged; increasing you level also unlocks new weapons!

When you kill other players, their score is added to yours.

If your castle is destroyed, it’s game over. So be careful not to stray too far from it.

There is a limited amount of special points available, so choose wisely.

Entering another player’s castle will cause you to take damage so try not to trespass for too long.