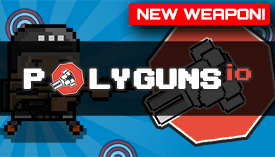 Polyguns.io is a free iogame. This is a world of topdown, multiplayer shooting heck! It is more than just an arena, it is a game. Battle against other players while destroying menacing polyGUNs!

Increase your level by destroying Polyguns, targets and killing other players.

As your level increases, you gain special points which can be used to upgrade the following:

You start with a pistol. As you progress and increase your level, you will unlock more powerful guns.

When a Polygun is destroyed, you are awarded Polytags based on how much damage you did to it. Polytags can be used to unlock new skins.

Go solo or invite your friends to play as a team and take down some Polyguns!